Turns out this food stuff is kind of important. Apparently you need it to live or something. Who knew (ah, sarcasm)? 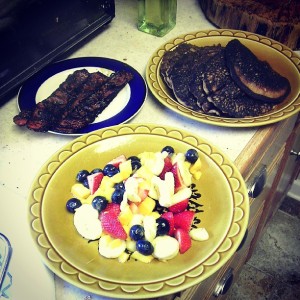 If only I could show food how much I cared for it by preparing awesome meals for my friends and family. I’m not that great when it comes to the whole cooking thing. Well… I’ve been told otherwise, but my confidence when it comes to my culinary skills is quite low. Not a complete novice in that place with the ingredients and the silverware and the uh…. KITCHEN! That’s it! I do know how to make a few dishes: enchiladas, spaghetti, guacamole, hummus… Yeah, most of the things I prepare are kind of on the easy side of things.

Honestly, I’m amazed by those that make delicious food and how effortless they make it all seem. One of those amazing individuals is my husband, Stephen. Now I know my opinion is biased, but his meals are downright stellar. It’s been brought up a few times on That Anime Show, but a dish worth mentioning is his white pizza (damn, now I want pizza). He makes everything from scratch, even the dough. It is so good, we’ve had more than a few friends invite themselves over when they know he’s making it. I’m actually intimidated to cook for him, he’s that good.

I’ve learned so much from Stephen about cooking and food in general (the dangers of processed foods, organic vs GMO, etc). He’s a cook that cares about the components of his dishes and that’s something to admire. Fun fact: Stephen worked in several kitchen off & on for years before becoming a sound engineer. He’s used his knowledge to school me on a few things and help me become a better cook. Needless to say, I rarely step foot in the kitchen without the supervision of Mr. Hoff.

Along with being a fantastic cook, my guy is wicked smart. That is not a biased opinion, it is fact. For the past year and a half, Stephen has been going to school at night and online to finish out his degree in Environmental Science (just a couple semesters left). Add that to working full-time and the guy has a pretty full plate. I’m so proud of him. As much as I love his cooking, I think its time for me to step up and get over my culinary insecurities (at least until he’s done with school)!

Wish I’d paid more attention in that one cooking class I took in high school. Best to start with recipes I’ve grown up with and others that I’ve watched Stephen execute. Once I’ve mastered those (or at the very least, succeeded in making them edible), I’ll move on to some of the more advanced dishes.

I can do this!