One of Few Audiobook Update #2

Lots of friends, namely much more seasoned producers, are quick to note how ambitious my approach to the One of Few audiobook was/is. Casting voice actors in these roles rather than have just one narrator multiplies the work to an obscene amount.


I shot out the sides with warnings like this: 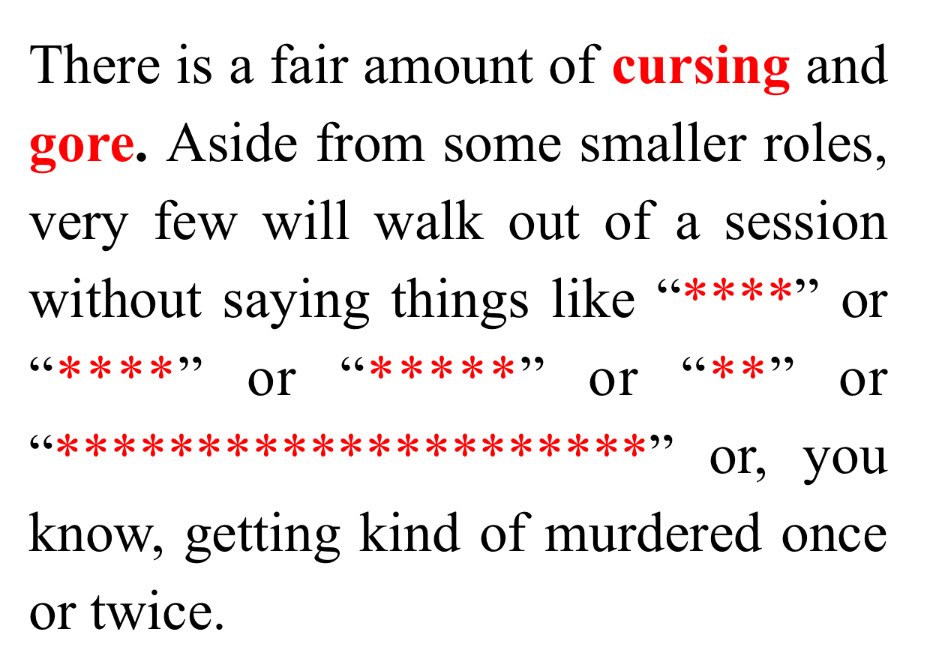 Even included a cheat sheet for terminology:

With what I do and the fact that I know so many amazing actors local to the Dallas/Fort Worth area, I did initially write certain characters with actors in mind. When I was writing, I had no idea that I was going to do the audiobook this way. I just usually write character’s dialogue with a certain voice in my head, mostly in screenplays. It was an easy decision for my very first book.

Despite this, one of the greatest things about auditions is the opportunity to be surprised. Not only by new-to-you voices but from people you’ve worked with before. Seriously, these people have amazing ranges. 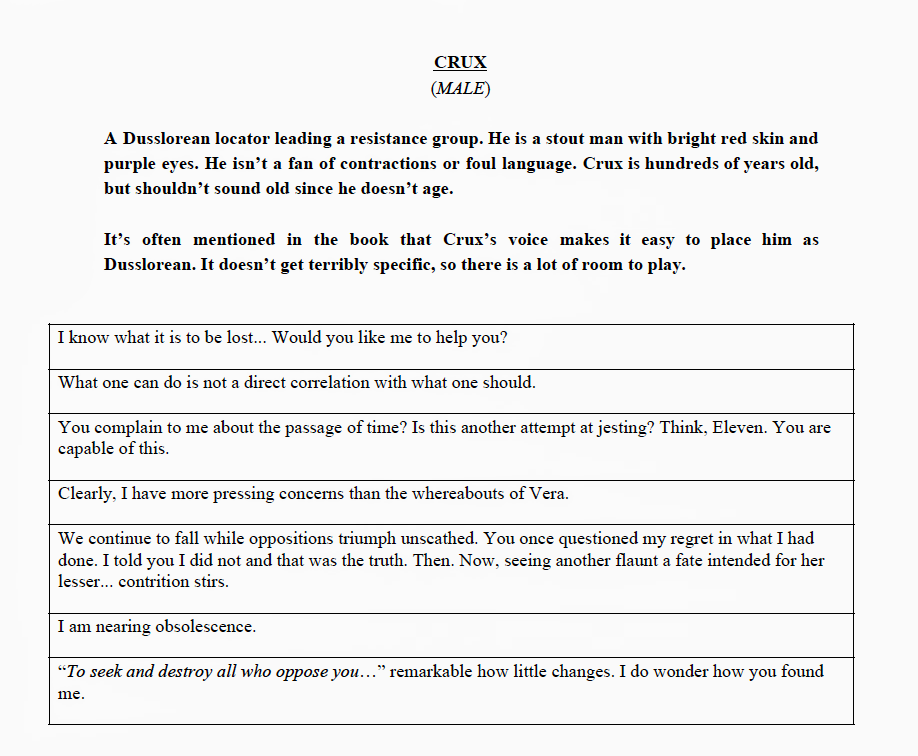 I actually met Grelle during my internship at FUNimation. He had just started traveling up to the studios from Houston and he happened to be starting a new show with Chris Cason called Kaze No Stigma. Imagine my surprise hearing him go from his Ren character (who is 12) to this low, gravelly villain for my show Corpse Princess to Akihisa Yoshii in Baka and Test to Armin Arlett in Attack on Titan to… this dude can do ANYTHING.

Can’t wait for y’all to hear what he did with this odd ol’ alien named Crux.

If you’re not familiar with One of Few, you might not know that you can’t really talk about Crux without bringing up Vera… 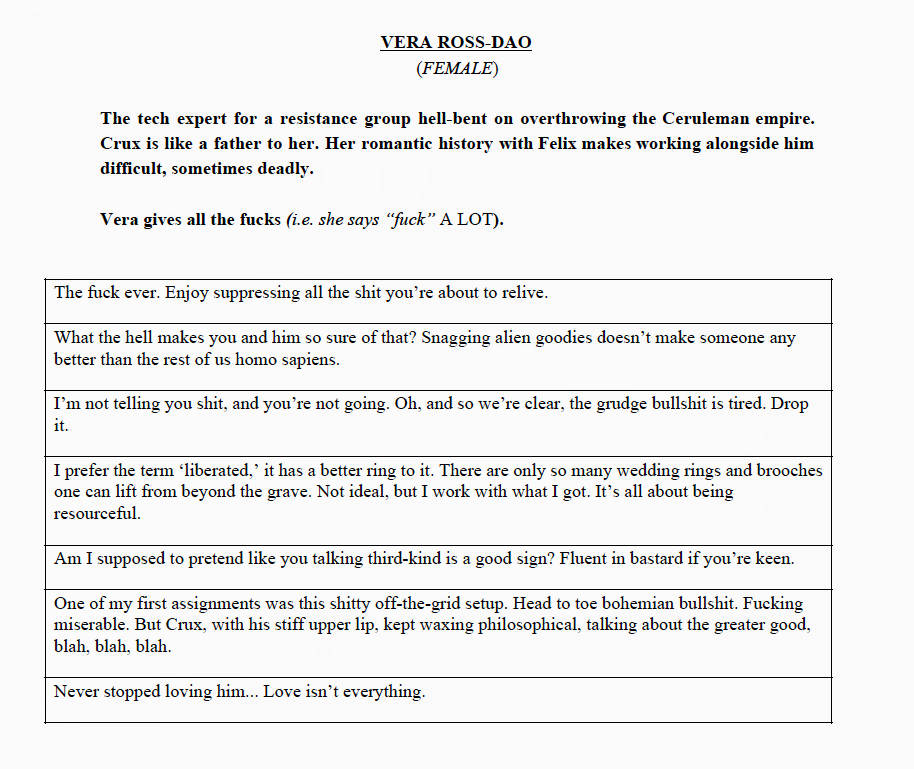 One of the first friends I made at FUNi was Monica Rial. She is just as chill and nice as you think she is. It’s not an act. This woman is the real deal.

She was so much fun to record and direct. If you don’t believe me, believe the bloopers. This girl has her own track!

And, like Crux to Vera, you can’t bring up Vera without talking about Felix… 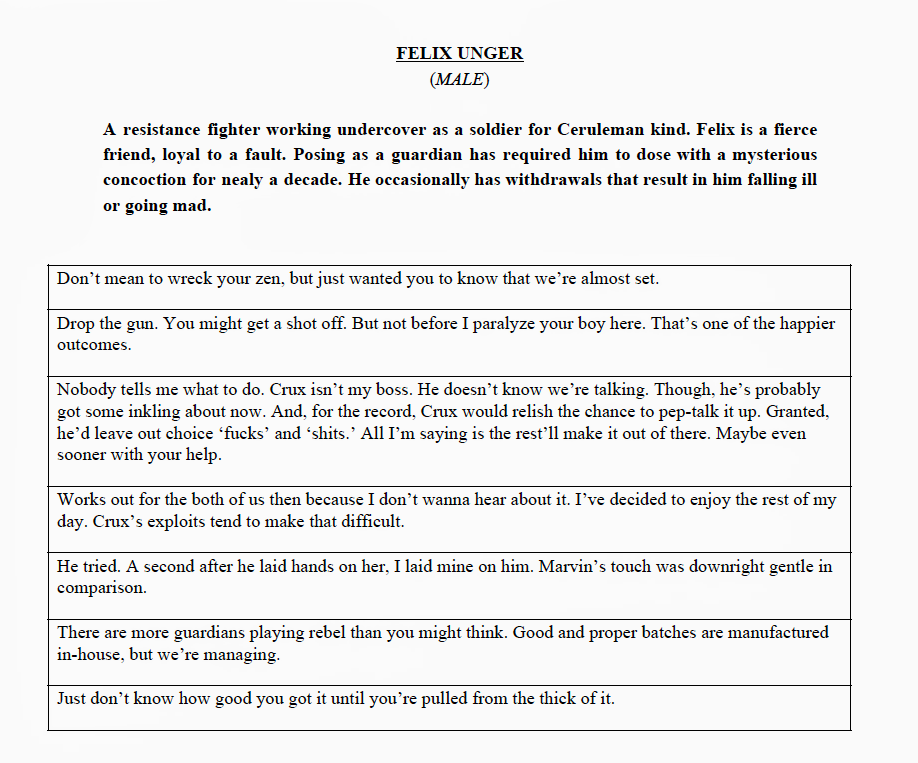 There’s this one guy that’s in a show about this super powerful guy named Gilbert and his friend Fajita. They hunt for dragon eggs or something and—have I pissed off enough Dragon Ball fans yet?

Over my decade of doing voiceover, I actually haven’t had many opportunities to work with Christopher Sabat. His low register and previous history working with Monica makes Felix’s relationship with Vera all the more entertaining to hear. 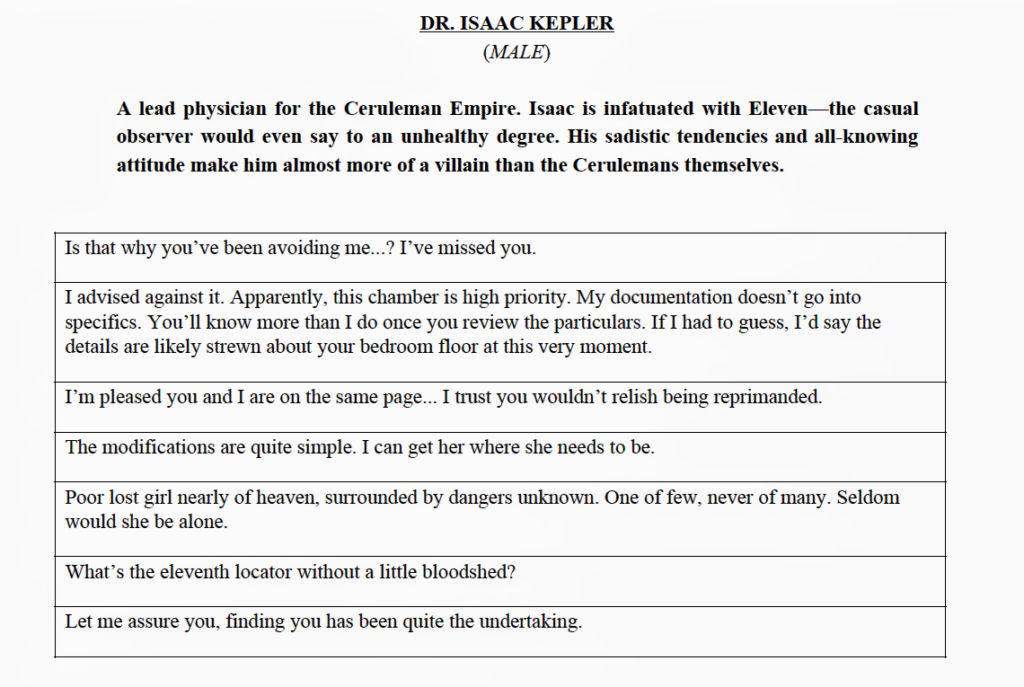 Rob McCollum is just a delight. I’ve had a major voice crush on this guy pretty much since I heard him recording Kaze No Stigma.

His take on the good doctor is so spot on that I’ve been finding it hard to edit his scenes. Isaac has a major creep factor to him. Needless to say, Rob makes one hell of a villain.

Polar opposite of Isaac is Eleven’s best friend Ten… 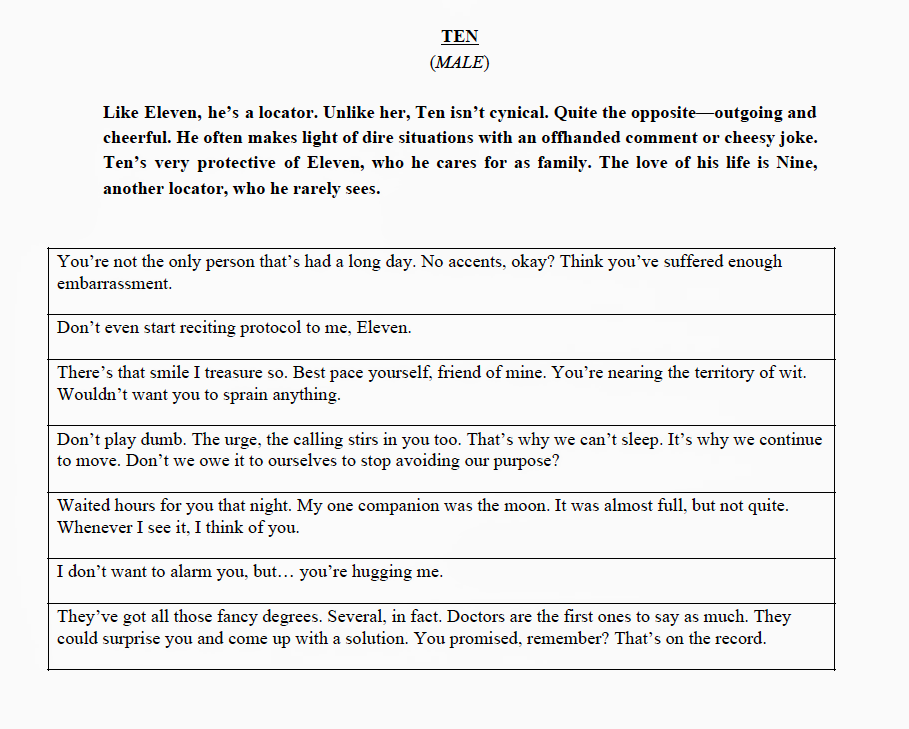 Christopher Wehkamp and I met in October 2014 during production of FUNi’s first simuldub Laughing Under The Clouds. Since then, we’ve become buds.

His Ten audition sounded so natural and charming. I didn’t have anyone in mind specifically for the tenth locator. Wehkamp made the decision to cast him an easy one.

Now… what did I say earlier…?

With what I do and the fact that I know so many amazing actors local to the Dallas/Fort Worth area, I did initially write certain characters with actors in mind.

The Porter teens weren’t in the original manuscript for One Of Few. I forget around when they were added but the second they were, I loved them. They’re so unlike the rest of the characters and probably two of the most human throughout the entire series. They are also a case of me casting their inspirations. 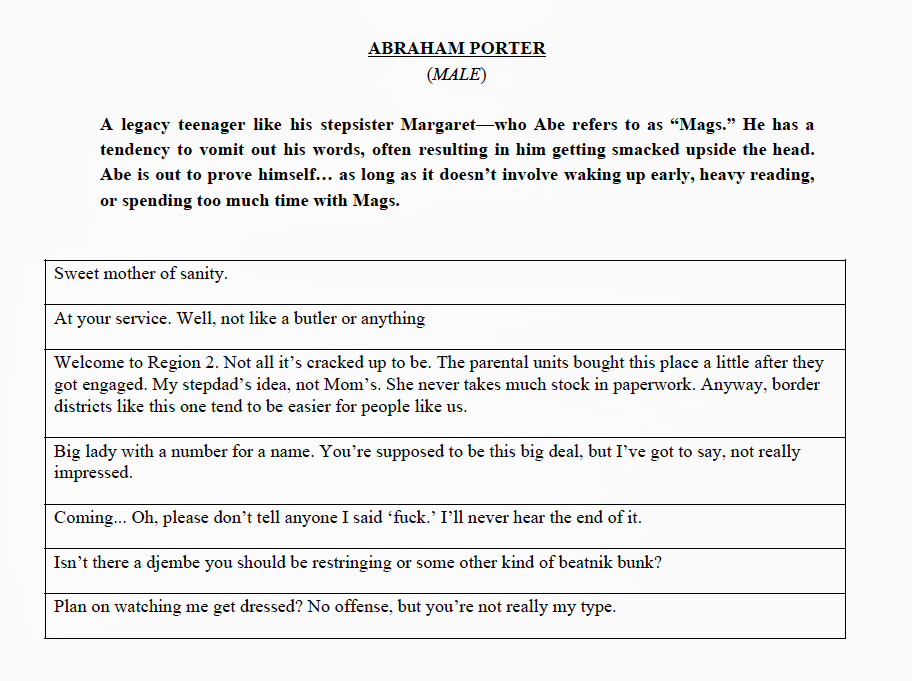 While most people I work with at FUNi are quick to talk about this lil’ youngin’ that was Al in Fullmetal Alchemist, I first knew Aaron Dismuke as this scrawny teenager I could talk about horror movies with.

Aaron has a very particular way of speaking and that was implemented into Abe’s dialogue. Many auditions gave Diz a run for his money but, in the end, he WAS Abe… You know, because he is. 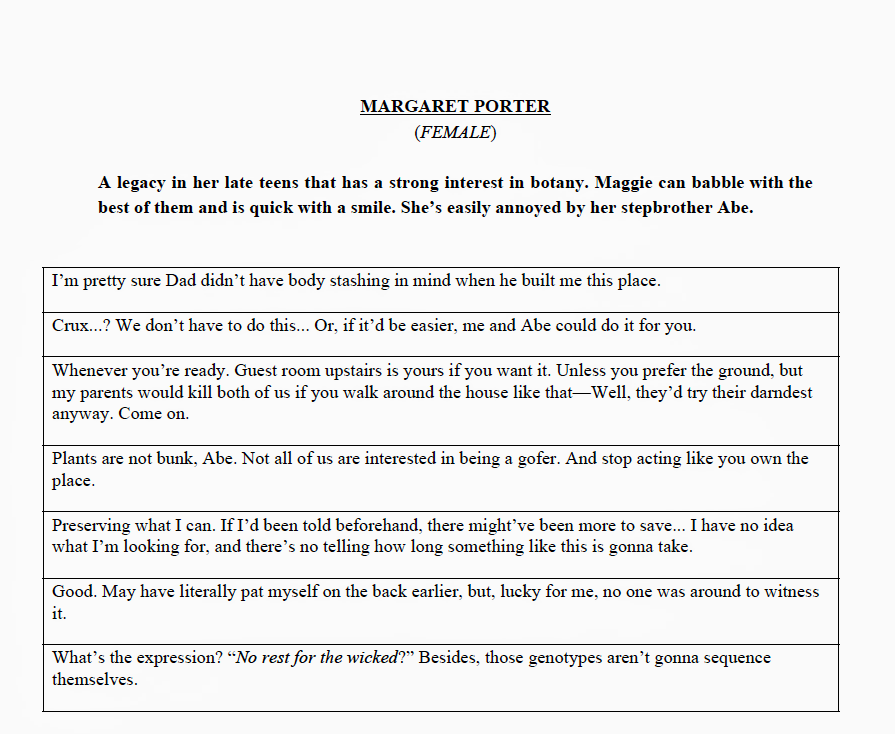 Maggie is kind-hearted, caring, and has an intelligence that is often underestimated… Remind you of anyone you know? Well, for me (obviously), that’s Tia Ballard.

Being able to talk to her about things that won’t be revealed right away was a surreal experience. Teasing about what’s to come with Tia as well as others and let them motivate that into their reads…? I am so fucking excited!

There are SO MANY MORE characters outside of these sides including Eleven herself (voiced by yours truly)! If you’d like to learn more about her, One of Few is available in print and digital via Amazon! If you’d rather wait for the audiobook, I totally get that.

Now that I’m hearing these characters actually interact with one another, I know that I made the right call. It’s a hell of a lot more work, sure. But worth it.

LOTS of fun things have kind of put the finalization of the chapters on hold. The thing about freelance is that sometimes our personal projects have to be put on the back burner when projects/gigs that have a more immediate payoff present themselves.

When I’m not away from the home studio, One of Few is my top priority. Seriously, I haven’t even made much headway on the second book of the series because I want to finish the audiobook for One of Few FIRST.

But don’t y’all fret. The audio files are coming slowly but surely!