Spent last weekend in Tulsa, Oklahoma. That’s right, I was lucky enough to be a guest at Tokyo in Tulsa!

I’m always nervous when trying out new panels, especially if I’m flying solo. I’ve found that walking around is better than sitting. Perhaps that’s because of my background in standup comedy. The conversation just flows easier and I love to make people laugh (shocker, I know). First panel of the con was Kind of Normal. I got to talk about hobbies and things outside the anime world (audiobooks, horror flicks, bootlegs, and so on). People seemed to enjoy what I had to say and the questions kept me on my toes (which is never a bad thing).

Right after Kind of Normal, I ran over to the panel next door to talk about acting. Acting 101 was the first group panel, all (J. Michael Tatum, Ian Sinclair, Eric Vale, & Jeremy Inman) but Brina were in attendance (her flight was delayed). The discussions were interesting because we all come from different backgrounds and do several things in the realm of acting.

Had the chance to ham it up with Peter Pixie (who I’d met at AnimeIowa in 2012) during Opening Ceremonies. The crowd was fantastic and that helped with my nerves. Yes, I get nervous. Anyone who says they don’t is lying or dead inside (… or something that I can’t immediately of). I just never know what to say when I’m bring introduced. If I can make them laugh, I consider it a win… Guess I won. 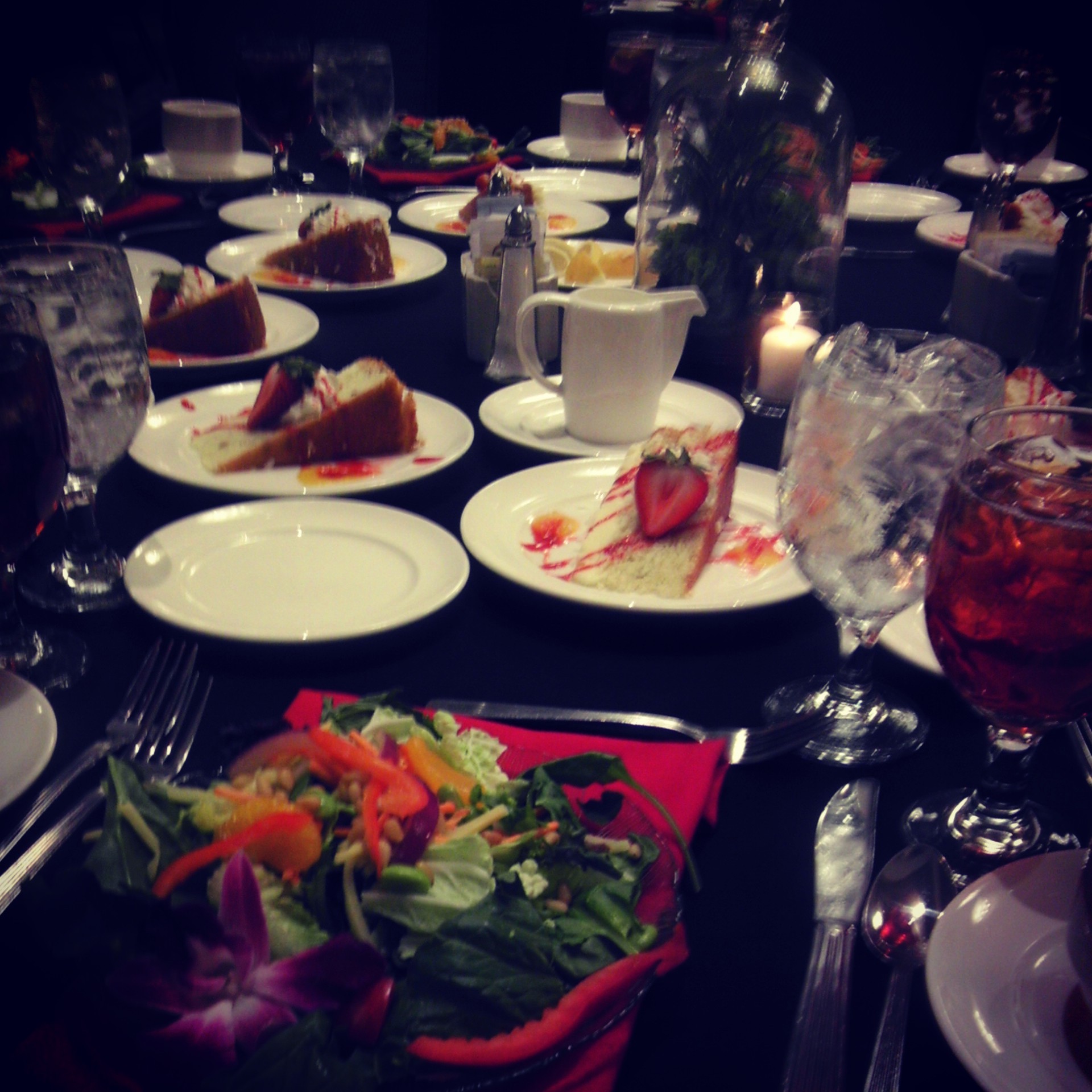 There’s a flower in my salad!

Joined my fellow guests for a Sakura Club dinner. It was an opportunity to hang out one on one with attendees and have some delicious food. All of us had our own table and people got to choose who they wanted to dine with. Several sitting at my table were new to the convention scene, but they were really nice. I was able to have a chat with one of That Anime Show’s first listeners, Donna (which was awesome). Peter Pixie and his wife (who were celebrating their 16th wedding anniversary) also graced me with their presence. All of us were able to geek out about a variety of things (not just anime). 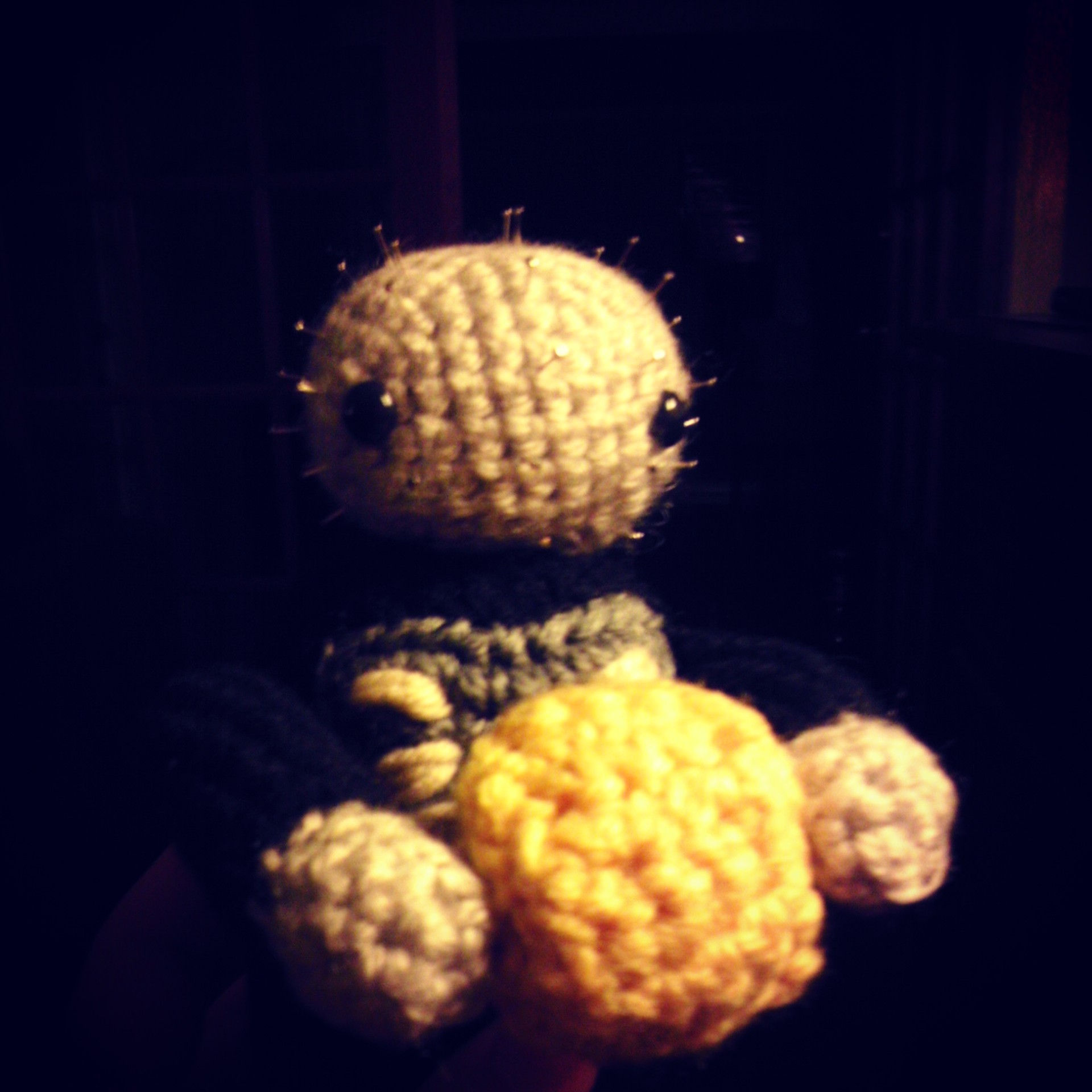 After everyone finished up with grub, we took photos with our dinner guests and signed a few things. I unexpectedly got a gift from a wonderful woman that went through the trouble of knitting me my very own Pinhead (with actual pins in his head)! For those just tuning in, I’m huge fan of Hellraiser. I involuntarily went into my super happy, squeaky voice (yes, I was that excited). She also made Tatum a Thor (full armor and everything). I absolutely LOVE my lil’ hellraiser and I will treasure it always!

A panel called TAS Unplugged… What could that be about? I rarely get to do conventions with my That Anime Show cohost, Tatum (some of you may know him better as “OH MY GOD, IT’S J. MICHAEL TATUM!!!”), so I like to talk about our little podcast whenever we can. For those wondering why we didn’t record a live episode, we refuse to do a show without the whole crew (no Stephen, no podcast).  The panel was a great way to introduce newbies to the show. Yes, some people might have gotten offended, but that’s nothing new to us. To be fair, we did warn them at the beginning. Though it was a little awkward with a nine year old cackling in the front row (not awkward enough to stop us from telling stories). 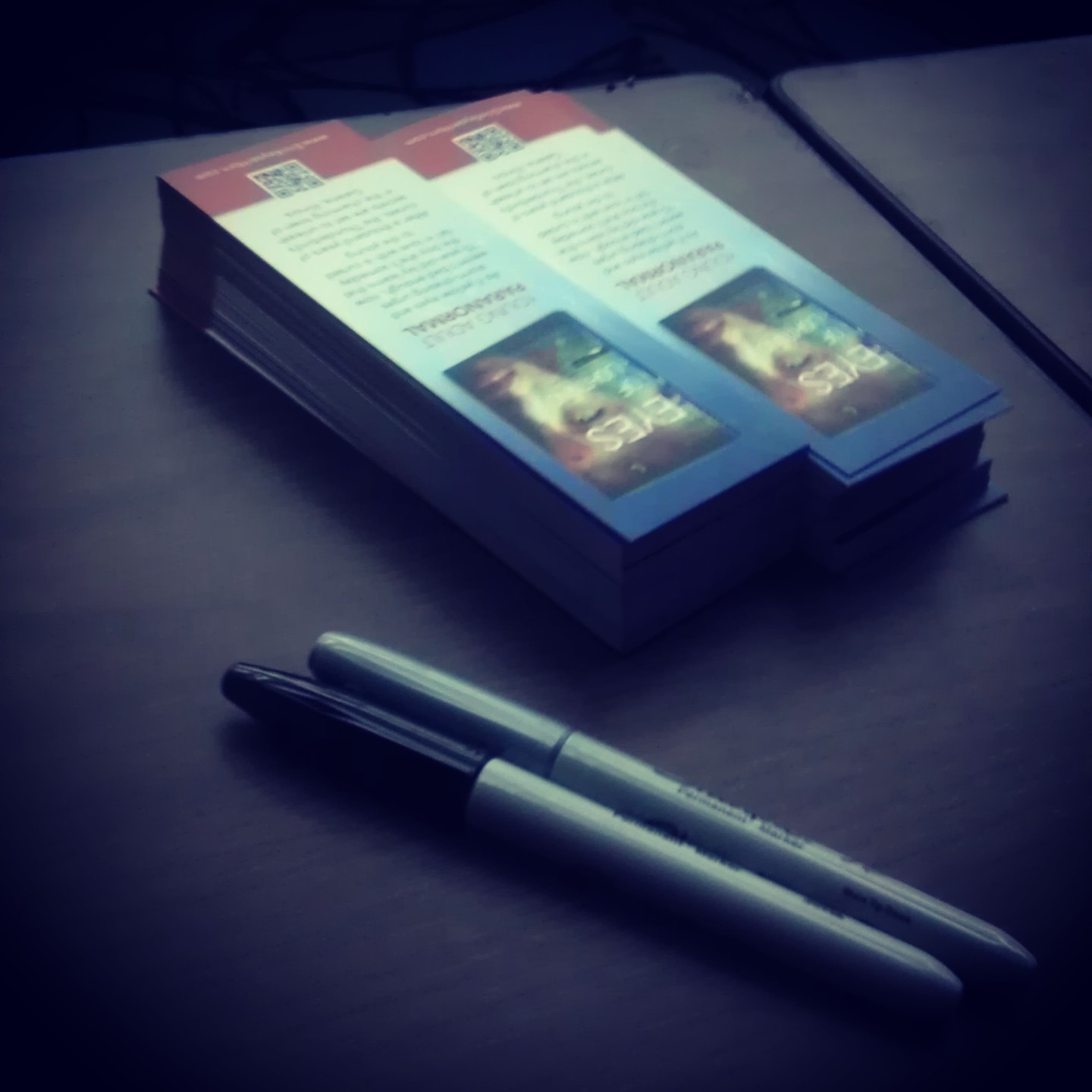 Eyes of Lightning for the win!

I’ve been toying around with the idea of bringing something to sign at conventions, but I never know what to bring. Erin Keyser Horn was nice enough to send me stuff for Eyes of Lightning (which is now available through Audible, ITunes, & Amazon). Shameless promotion I know, but I’m proud of what I do so I’m gonna show stuff off! Many attendees were happy that I had something to give them. Our first autograph session was pretty much the only thing I got to do with Brina before she had to hop on a plane (guess we’ll have to do another con together sometime). 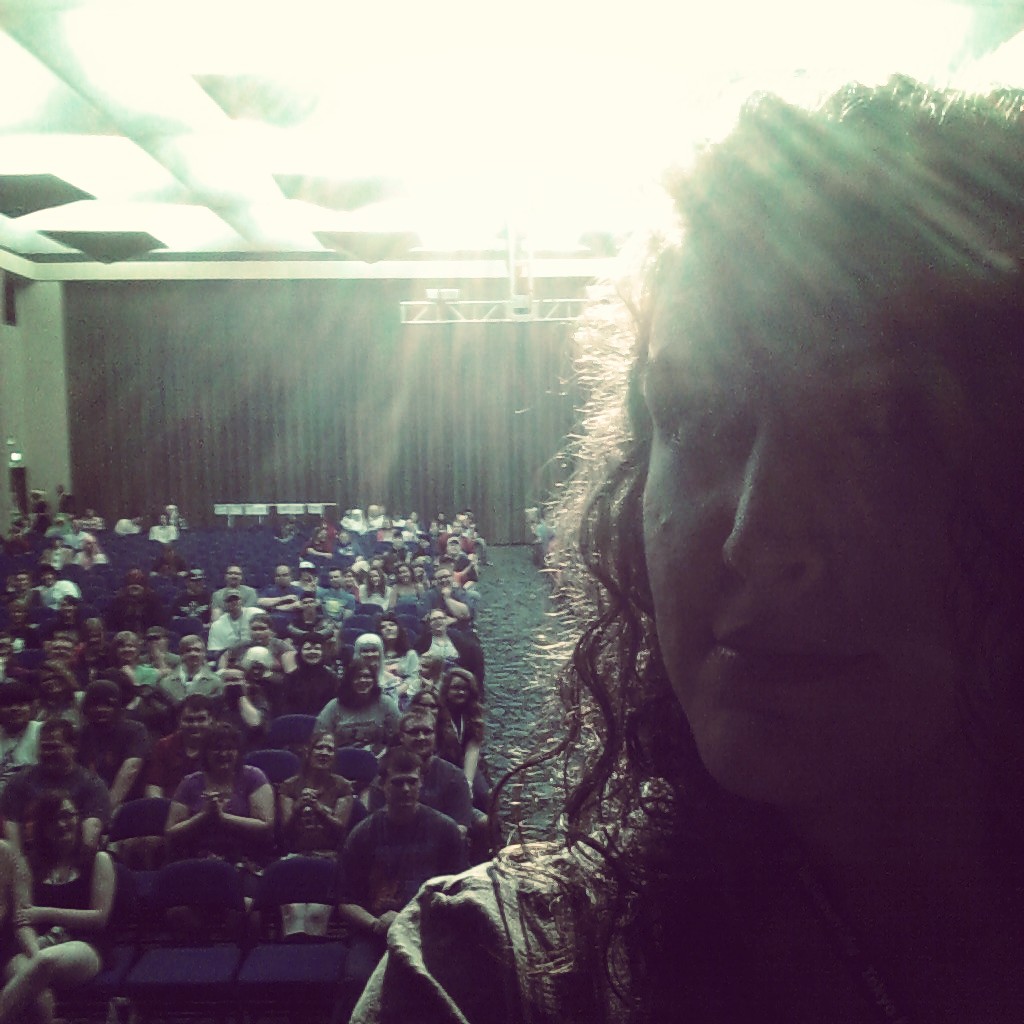 Spend an Afternoon with the Voice Actors (minus Brina)… Who would want to hang out with such silly people? Peter Pixie played host, asking us questions that were sent to him beforehand. We had a lot of fun with the questions, the guys (Ian, Jeremy, & Eric) decided to time how long Tatum would take to answer a question. At one point, Tatum spilled a bottle of water on me and I had no choice but to sit there for the remainder of the panel (oh, what fun). He was so embarrassed and I had fun giving him a hard time about it… What? He’s one of my best friends, it’s part of my job (seriously, read your handbook).

Historians, remember the day that I finally did a good and proper panel on ADR (seriously, remember this important day)? Talking about the technical stuff is always a risk (“What if I’m too heavy on the jargon?”), but all the attendees seemed to be following along quite well. I walked back & forth throughout the panel (again, standup is best when going solo) and talked about all that goes into the dubbing process (translations, writing, casting, directing, reviewing, etc.). As far as I’m concerned, ADR You Kidding Me?! was a complete success! 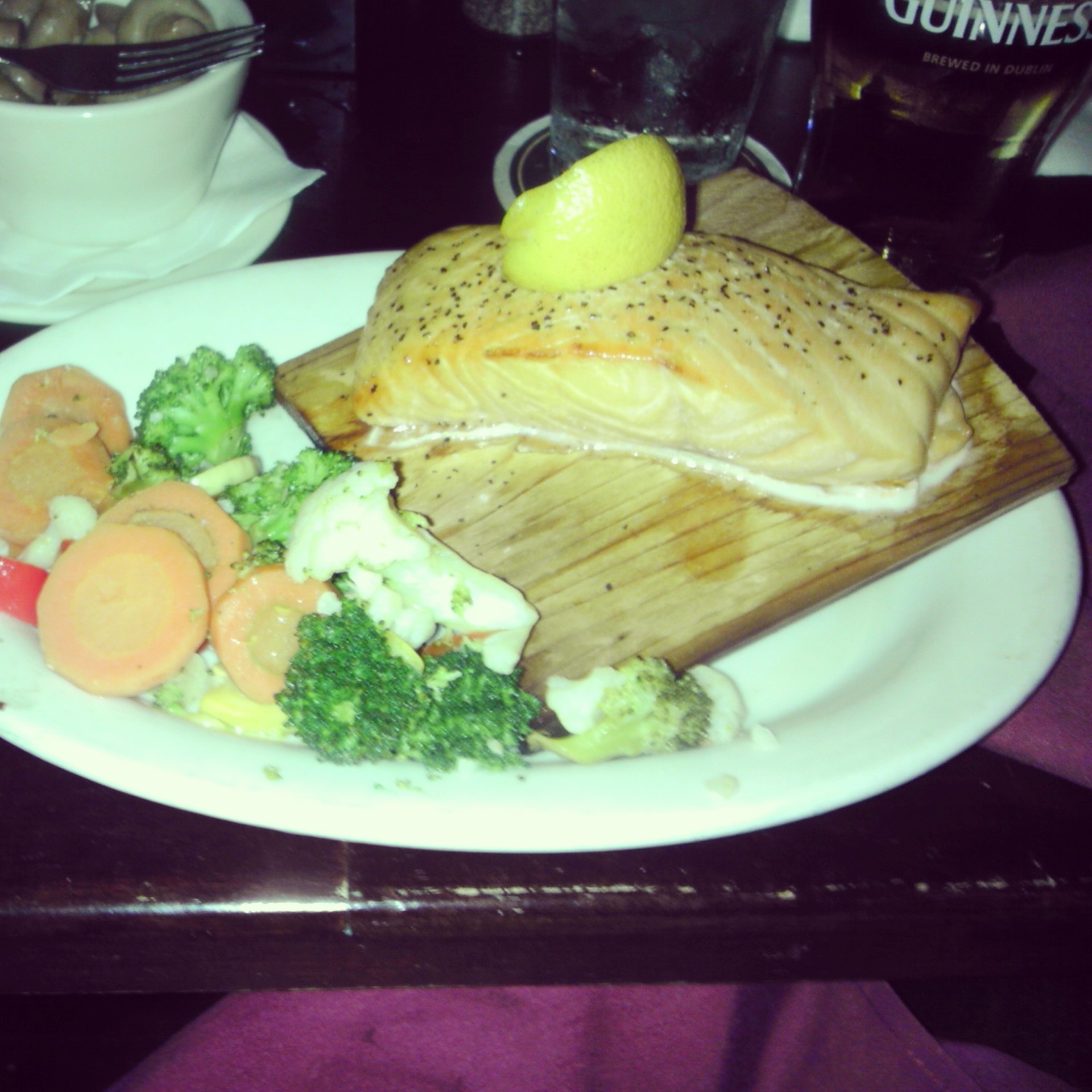 I love trying out local spots when I travel. James (the beautiful soul that invited me to Tokyo in Tulsa) brought several of us to Kilkenney’s. I’d heard great things about this Irish pub and it did not disappoint. The menu made it hard to choose (food or drink). I ended up trying something called a “Bruised Pear” (Guinness & Ace Pear Cider) and now it is easily one of my favorite drinks (alcoholic or otherwise). Food-wise, I eventually decided on the Cedar Forest Salmon and I have no regrets (don’t call me a foodie, call me Terri). Seriously, if you’re ever in Tulsa and looking for good grub, do yourself a favor and go to Kilkenney’s. 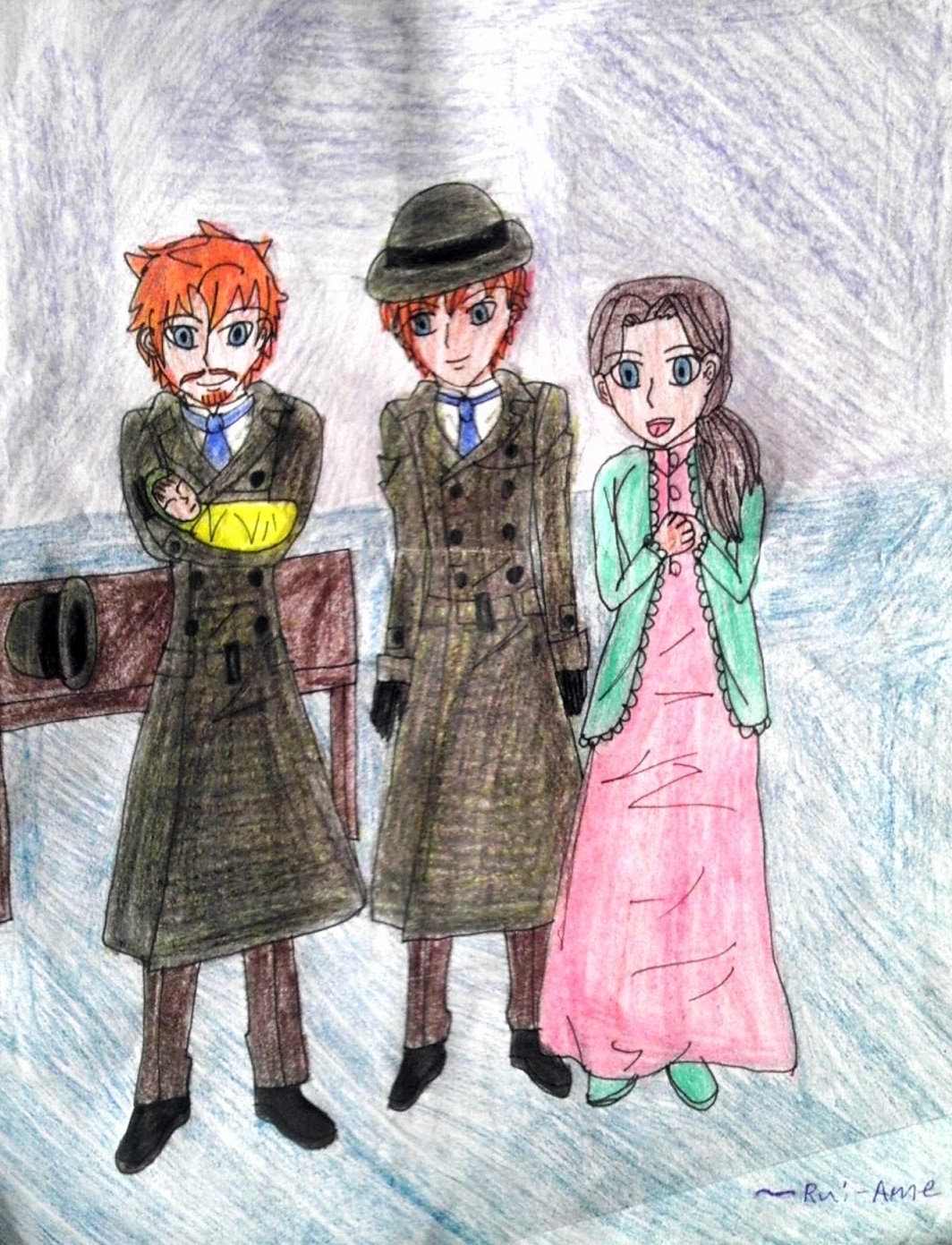 Maria, her husband, their baby, & her brother-in-law.

Pinhead wasn’t the only thing I walked away with. I got some fan art during my second autograph session! Not ashamed to admit it, I shrieked when a lovely young lady handed this to me. Though I sign a lot of Black Butler stuff, I usually have to explain who I am in the show (Maria, Abberline’s fiancée, as well as other bit characters in both seasons). I can’t believe someone actually went through the trouble of making an Abberline family portrait. This is so adorable! The artist (sorry, in all the excitement I forgot to ask you what your name was) also drew Taurus (Fairy Tail) for Jeremy, which we also geeked out about. I can’t wait to add this to my little fan art collection (it’s not huge, but I love it all)! 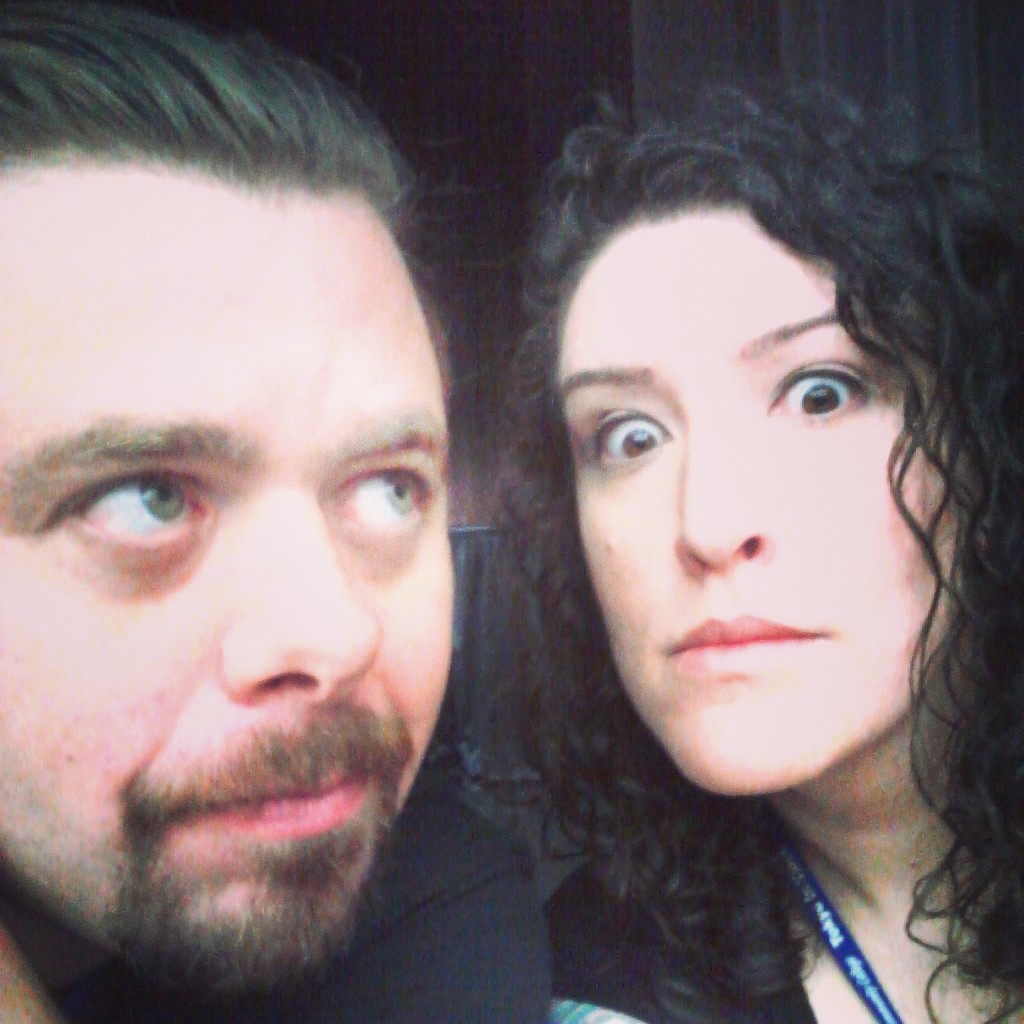 Sunday’s Voice Acting Q & A was probably the most fun I’ve ever had on a group panel. I hate that it took me going to Oklahoma to realize how awesome Jeremy Inman is. Seriously, he’s adorable and knows how to make me laugh so hard I cry (wear waterproof mascara around him). We had a lot of great questions, not the usual “What was it like recording blah blah blah?” or “How do I become a voice actor?”… Apocalypses, supervillains, worlds made entirely of cheese… Those that weren’t there definitely missed out (you can witness some of the insanity via YouTube). 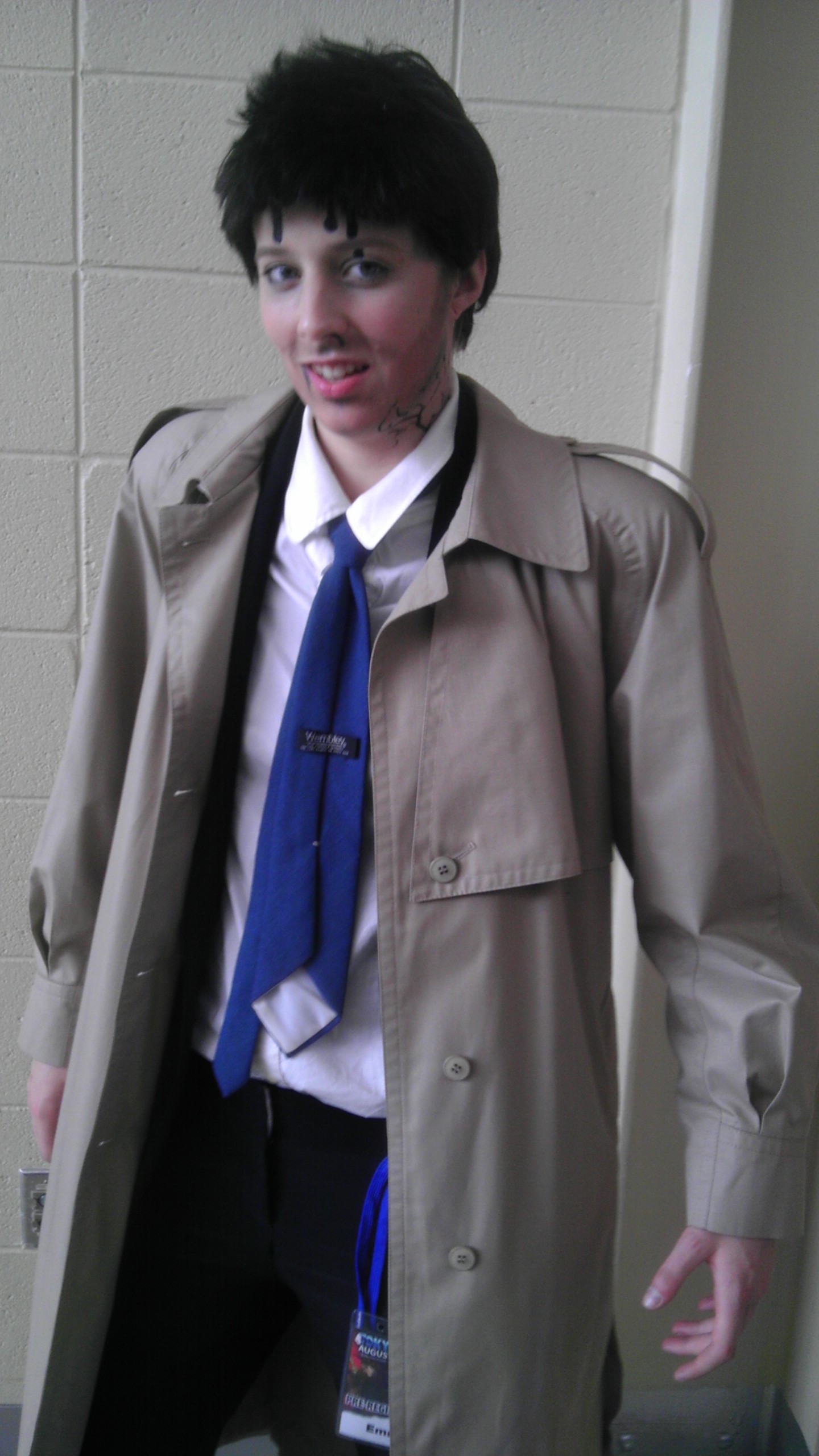 Leviathan blood and all!

The Doctor (several regenerations), Panty & Stocking, Ramona Flowers… There were some phenomenal cosplayers. That’s one of the best parts about going to a convention, seeing everyone’s cosplay. I wish I’d had the time and/or energy to take more than one photograph. As much as I hate to admit it, I’m a fan of Supernatural (shut up, the guys are pretty). I was on the fence until the character of Castiel made his first appearance. He’s awkward and a total dork a good chunk of the time, so it makes sense that I love that character. I saw this chick walking around and chased her down so I could snap a pic for Stephen (my husband). The cosplayer (if you can’t tell, I suck at getting names) had done several types of Castiel cosplay throughout the weekend (one even included angel wings).

I could go on and on (and on) about how much fun I had at Tokyo in Tulsa, but something tells me this is already pretty wordy. If you have the chance to go to TnT next year, do it!