Recovery of an MMO Junkie is now available! 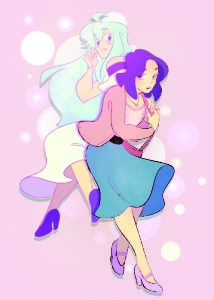 Moriko Morioka is a single 30 year old NEET (someone who is Not in Education, Employment or Training). Moriko quits her corporate job and pretty much figures the real world isn’t for her. Looking to get back into her old gaming habits, she finds an MMO called Fruits de Mer. Moriko decides to play online as a very handsome young man named Hayashi. On her first quest as Hayashi, Moriko’s noob status is pretty apparent. That’s when she meets another online user by the name of Lily. IRL, Moriko encounters Yuta Sakurai. After their first encounter, things get… complicated.


A YEAR AGO TODAY…


For whatever reason, I’m believed to be the voice of Bakugo’s mother in My Hero Academia. It happens often enough that I basically told myself that I must’ve forgotten I recorded it.

On October 9th, 2017, I got linked to something via Twitter about Bakugo’s mom for the umpteenth time and finally broke down and messaged Clifford Chapin, who is the voice of Bakugo as well as many other cool characters. He is also an accomplished voice director.

“I feel horrible for not knowing this, but am I your mom in this show?”

“Do you remember yelling at someone for screaming while he was brushing his teeth?”


We didn’t figure out until days later for sure—btw, I AM NOT BAKUGO’S MOM. That honor goes to Rachel Glass.

As Clifford and I traded messages back and forth more that night, he said:

“Anyway, this is a good time for me to tell you, I put in for you to be the lead on my next show. Hope that’s cool.”

… with FUNimation‘s hectic broadcast dub schedule, we don’t always get to audition for shows. Sometimes we’re just cast. We don’t know that we’re regulars in a series until we go in for a session.

And, yes. That’s ALWAYS cool with me. Getting cast will never not be cool!

Since I’d JUST finished working on Planetarian: Hoshi no Hito with Cliff, I was looking forward to working with him again. Knowing nothing about the show he gave me the rundown on Recovery of an MMO Junkie. Knowing that this had the lead who was in her 30s, geeky, awkward, anxious… Yeah, I was excited!

Some 10 episodes and an OVA later, the show will always hold a very special place in my heart. I got to work alongside astounding talent. There were tears, anxiety, and WAY TOO MUCH laughter.

Whether you’re a fan of the dub or the sub, please consider watching/purchasing Recovery of an MMO Junkie. A lot of love went into this show, both in Japan and here in the states. I think it shows in the end result.